A total of 25 states posted year-over-year increases in foreclosure starts — 20 of which use the longer judicial foreclosure process.

New Jersey led the way with a 55% increase, followed by Florida with a 53% increase and Connecticut posting a 48% increase.

In comparison, the states that posted the biggest foreclosure decrease included Nevada with 57%, followed by Utah with 40% and Oregon with 40%, respectively.

Florida posted the nation’s highest state foreclosure rate in 2012, with 3.11% of housing units — one in 32 — receiving a foreclosure filing for the year.

“2012 was the year of the judicial foreclosure, with foreclosure activity increasing from 2011 in 20 of the 26 states that primarily use the judicial process, and a judicial state — Florida — posting the nation’s highest state foreclosure rate for the first time since the housing crisis began,” said Daren Blomquist, vice president at RealtyTrac.

He added, “Meanwhile foreclosure activity continued to decline in 19 of the 24 states that use the more streamlined non-judicial foreclosure process, but there could be a backlog of delayed foreclosures building up in some of those states as well as the result of recent state legislation and court rulings that raise the bar for lenders to foreclose.”

The average time to complete a foreclosure in the fourth quarter increased 8% from the third quarter to a record-high of 414 days.

Lower foreclosure inventory during 2012 helped home prices to hit bottom and start rising in many markets during the year, the report said.

Median sales prices nationwide during the first 10 months of 2012 on average were 99% of median list prices. The average monthly median home price was $164,712, relatively similar to same median home price a year earlier.

“The influx of foreclosure activity in 2012 in many local markets should translate into more foreclosure inventory available for sale in 2013 in those markets,” Blomquist noted. “That is good news for buyers and investors, but could result in some short-term weakness in home prices as the often-discounted foreclosure sales weigh down overall home values.”

After five consecutive years, Nevada dropped to the second slot on the list with a 57% decrease in foreclosure activity from 2011. A total of 31,658 properties had a foreclosure filing in 2012. 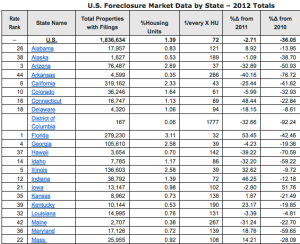